In this electrifying novel from USA Today Bestselling Author Kennedy Layne, the Safeguard team is coming ever closer to catching an elusive serial killer who might very well be hunting one of their own…

Sawyer Madison has spent the last few months hunting down a sadistic killer. He and his team don’t seem to be any closer to solving this particular case that has hit a little too close to home.

Fortunately, they had all served in the Corps. That kind of training and dedication meant none of them considered quitting before the mission was done.
Camryn Novak had spent most of her childhood, and a large part of her adult life, dealing with her overprotective brother. So when an admirer becomes a little too obsessed with her due to her high-profile career, she decides it would be simpler to reach out to someone a little less emotionally invested.

Sawyer never expected to bump into the sister of one of his teammates while traveling on assignment. Women like her were off limits—one shouldn’t mix business with pleasure. One burning touch was all it took to make his good intentions go up in flames. Unfortunately, it won’t just be her brother’s wrath he’s forced to face when an unknown perp targets Camryn—it might very well be the same psychopath they’ve been hunting all along.

Casual Impressions is the fourth book in the Safeguard Series by Kennedy Layne, and was the first book that I read. I enjoyed reading the book, although it wasn't a favorite of mine, I definitely would enjoy going back and reading the first three books in the series.

I loved Camryn and Sawyer, and I loved seeing how they both grew throughout the story, and how their love developed. I also loved the suspense of the book, and I thought the romance was a nice touch to match with the suspense.

I would recommend this book if you are a fan of suspense novels or romance novels. This book was a pretty enjoyable read, and can be read as a standalone. 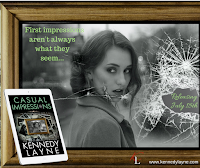 Kennedy Layne is a USA Today bestselling author. She draws inspiration for her military romantic suspense novels in part from her not-so-secret second life as a wife of a retired Marine Master Sergeant. He doubles as her critique partner, beta reader, and military consultant. They live in the Midwest with their teenage son and menagerie of pets. The loyal dogs and mischievous cats appreciate her writing days as much as she does, usually curled up in front of the fireplace. She loves hearing from readers--find out how to connect with her at www.kennedylayne.com.