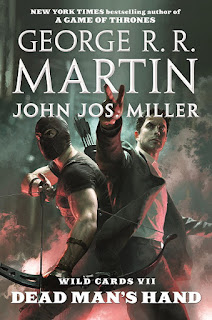 Chrysalis, the glass-skinned queen of the Joker underworld, has been found brutally murdered in her popular restaurant, the Crystal Palace. New two men are out to find her killer: Jay Ackroyd, the Ace private investigator who discovered her ruined body, and the vigilante archer known as the Yeoman, who has been framed for the crime.

Their quest leads them on a nightmare odyssey of madness, violence, passion, and political intrigue that will forever alter the fates of Aces and Jokers everywhere.

Experience this gripping tale of mystery and suspense, brought to you from the incredible imaginations of George R. R. Martin and John Jos. Miller in their first collaborative novel.

Rights to develop Wild Cards for TV have been acquired by Universal Cable Productions, the team that brought you The Magicians and Mr. Robot, with the co-editor of Wild Cards, Melinda Snodgrass as executive producer.


An alien virus has changed the course of history, and the surviving population of Manhattan struggles to understand the new world left in its wake. Natural humans share the rough city with those given extraordinary--and sometimes terrifying--traits. While most manage to coexist in an uneasy peace, not everyone is willing to adapt.

The Wild Cards Are Coming…to Television! Read More About it HERE!


“Perhaps the most original and provocative of the shared worlds books.” —Peter S. Beagle, author of The Last Unicorn


"Delicious...Everything I hoped for in a new Wild Cards book. The character interactions and plot twists have exactly the complexity, surprise, and unsentimental realism I'd expect out of a George R. R. Martin project." —Austin Grossman, author of Soon I Will be Invincible on Inside Straight


“This is a wild ride of good, blood-pumping fun that packs a surprisingly emotional punch for a book that looks on the surface like just another superhero adventure.” —Publishers Weekly on High Stakes


"Martin has assembled an impressive array of writers. . . . Progressing through the decades, Wild Cards keeps its momentum to the end." —Locus


"The shared-world series known as Wild Cards has had a long and illustrious history of contributors and achievements." —SciFi.com


“Emotionally powerful. Wild Cards deals up the variety of short fiction without losing the continuity of a novel.”—The Seattle Times

Overall, I thought that Wild Cards VII: Dead Man's Hand was a well-written story with an intriguing plot and interesting characters. The pacing was for the most part, fast-paced. Although there were parts that were slow.

This series is basically about a alien virus that infects people and turns them into Aces or Jokes (both have super abilities). The concept of this series is amazing, and I think it's original. It's also set in the 1940s, which adds another layer of originality.

I just had trouble relating to the characters. They were very well-developed, but there was just something missing for me. Other than that, the book was fantastic. It's one that I would highly recommend. Especially for lovers of sci-fi.

George R.R. Martin was born September 20, 1948 in Bayonne, New Jersey. His father was Raymond Collins Martin, a longshoreman, and his mother was Margaret Brady Martin. He has two sisters, Darleen Martin Lapinski and Janet Martin Patten.

As a conscientious objector, Martin did alternative service 1972-1974 with VISTA, attached to Cook County Legal Assistance Foundation. He also directed chess tournaments for the Continental Chess Association from 1973-1976, and was a Journalism instructor at Clarke College, Dubuque, Iowa, from 1976-1978. He wrote part-time throughout the 1970s while working as a VISTA Volunteer, chess director, and teacher.

Moving on to Hollywood, Martin signed on as a story editor for Twilight Zone at CBS Television in 1986. In 1987 Martin became an Executive Story Consultant for Beauty and the Beast at CBS. In 1988 he became a Producer for Beauty and the Beast, then in 1989 moved up to Co-Supervising Producer. He was Executive Producer for Doorways, a pilot which he wrote for Columbia Pictures Television, which was filmed during 1992-93.

Martin’s present home is Santa Fe, New Mexico. He is a member of Science Fiction & Fantasy Writers of America (he was South-Central Regional Director 1977-1979, and Vice President 1996-1998), and of Writers’ Guild of America, West.