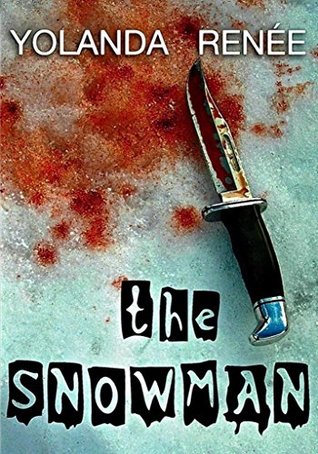 It takes a true artist to pursue his victims in the art of seduction, and Stowy Jenkins is no exception, especially with blood as his medium.
Stowy Jenkins, aka, Stone, and as Alaskans refer to him, the Snowman, is a true artist. His muse, Gigi, is the ultimate inspiration for his painting. Her rejection inspires him to use a very unusual medium…blood.
While art may be his passion, the taste for blood is his obsession, and multiple murders, the result.
Rookie, Detective Steven Quaid, is no fan of the Snowman’s murderous exhibitions. A twisted and deadly relationship bond the two men and neither knows who will come out of it alive.

Cover Review:
I am not a huge fan of the cover. I do like the simplicity of the cover, but at the same time, it's not the most appealing cover to me. I definitely feel as if it accurately represents the book though.

Review:
So, here's my final thought on this book. It wasn't the worst book out there to read, there were some good parts of the story, but I don't think this book was a good fit for me. Overall, there were a lot of things that personally bothered me, but might not bother other people. For instance, I felt that the author had way to many names being thrown into the book, and they were confusing because I had no idea what they had to the story until much later on the page or in the paragraph, but it was always like for me, "Wait, who is this character?"

Starting off, the book really hooks you with a very deadly beginning. It doesn't take long for the pace of the story to slow down incredibly. I, for one, don't really like reading slow books. They don't really hold my attention, and I just felt like this novella was very slow. There was also a lot of things that were easy to spot that get mentioned in the story, and it took away some of the suprise for me, because I saw it coming.

I was unable to relate to any of the characters. The majority just didn't interest me, or I really couldn't stand. I had some issues regarding one of the characters and how she was being portrayed. I felt there were moments where the author was contradicting who this person was, and I didn't like that. It was like there were two people instead of just this one, in my opinion.

When reading this novella, you already know who the killer is. It's in the synopsis, and I knew that going in. This is the first book that I have read where you know who the murderer is right from the beginning. There is no mystery or intrigue involved. As I was reading, I determined that I really don't like that. I don't like knowing who it is, because that is one of my favorite things about mystery books is trying to figure out who it is. This is just a preferentail view of mine. I will say though, the author did a fantastic job of making our murder a well-written psychopath. It was creepy, but also very decptively charming. He knew how to get what he wanted throughout the story, although once, I thought it was overdone. I also really thought the concept of the murder was interesting. He stood out from other books where you just have someone killing with no interesting aspect.

Finally, I would say if you are unsure how you would feel after reading my review regarding whether or not you want to read this novella, check out some positive reviews and make a decision. My opinion of the book may not be reflective of your opinion of the book. At this point, I have no desire to read the Dective Quaid Mysteries. If people tell me they are much better than this book, I might consider reading them.
Posted by Chelsea Hunter at 4:00 AM