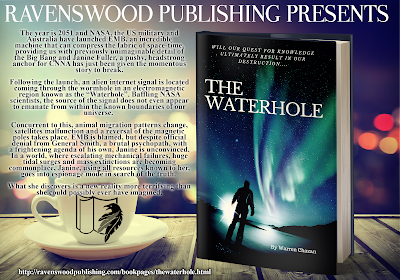 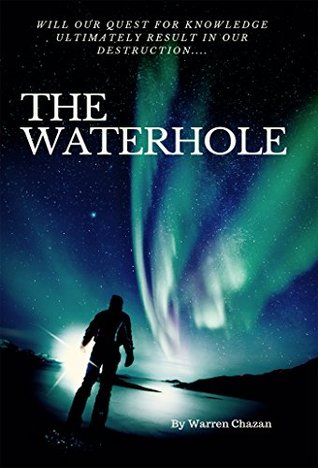 The year is 2051 and NASA, the US military and Australia have launched EMB, an incredible machine that can compress the fabric of space-time, providing us with previously unimaginable detail of the Big Bang and Janine Fuller, a pushy, headstrong anchor for CNNA has just been given the momentous story to break. Following the launch, an alien internet signal is located coming through the wormhole in an electromagnetic region known as the "Waterhole." Baffling NASA scientists, the source of the signal does not even appear to emanate from within the known boundaries of our universe. Concurrent to this, animal migration patterns change, satellites malfunction and a reversal of the magnetic poles takes place. EMB is blamed, but despite official denial from General Smith, a brutal psychopath, with a frightening agenda of his own, Janine is unconvinced. In a world, where escalating mechanical failures, huge tidal surges and mass extinctions are becoming commonplace, Janine, using all resources known to her, goes into espionage mode in search of the truth. What she discovers is a new reality more terrifying than she could possibly ever have imagined.

I really enjoyed reading Waterhole. It was more interesting than I was expecting it to be. I wanted to read it, but there was a part of me that was wary that it wouldn't be as good as I wanted it to be. I thought the plot was very intriguing. The pacing was at some points a little slow for my taste, but overall, it was nicely paced and it didn't drag the story along to much.

I would recommend this book if you are interested in science fiction books.

Warren Chazan was born and raised in South Africa, emigrating to Sydney, Australia in 2005, where he qualified as an anesthetist. He lives in the beachside town of Terrigal, where he now works and writes. The “Waterhole” is his debut novel that blends together three areas of interest; astronomy, the possibility that we are not alone in the universe, and humanity’s quest for knowledge (which could ultimately be used for both good and evil). Having studied astronomy, he tries as much as possible to remain true to real Science, while still attracting the attention of the average reader, who is simply seeking a fast paced story.

He is currently working on his second novel, "Lucifer's Pill,"(a medical thriller).