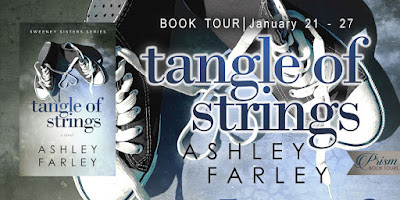 On Tour with Prism Book Tours.

Tangle of Strings
By Ashley Farley

We hope you enjoyed the tour! If you missed any of the stops, go back and check them out now...

Launch - Note from the Author

I hope you’ll enjoy reading about the Sweeney sisters as much I’ve enjoyed writing about them. They are real women faced with everyday challenges, struggling to balance the demands of career and home while remaining true to themselves.

Reading Is My SuperPower - Spotlight

Annie checked the clock on the dashboard. She had eight minutes to change into her work clothes, grab a snack, and still be on time for her after-school job at Captain Sweeney’s Seafood Market. She turned off the main road and zoomed down the wooded driveway toward the house. When she rounded the last bend, she saw Heidi leaning against the hood of her vintage turquoise Mustang.

Annie glared at her. “You gave up the right to call me honey, or any other term of endearment for that matter, when you abandoned me.” She tried to brush past Heidi, but she grabbed her by the arm.

Annie yanked her arm away. “The decision was right for you at the time. A very selfish decision, I might add. You took off to Hollywood to chase your dreams of becoming a big movie star, and left me with a man who didn’t know how to scramble an egg or balance his checkbook, let alone raise a little girl.”

Annie stalked off toward her car, but Heidi teetered after her on spiked-heel booties. “You and I were getting along so well together back in December, before you found out who I was. We were becoming friends. We share so many things in common. I know we can build a life together based on that friendship. You can come live with me. I recently signed a lease on the second-floor apartment in a newly renovated old home down on Broad Street, on the Battery. I think you’ll like it. I even have an extra bedroom for you.”

“I’m not your baby! You abandoned your baby sixteen years ago.” Shoving Heidi out of the way, Annie jumped into her car and struggled to fasten her seat belt. As she shot off down the driveway, she watched her mother slowly disappear in the rearview mirror. She careened onto Creekside Drive with barely a glance in either direction. Tears blurring her vision, she smacked her palms against the steering wheel. “Ugh! I hate her!”

He engaged his blue lights, preparing to pull her over, when the accident happened. Tires screeched and a horn blasted as the minivan swerved into Annie’s lane. The sounds of metal crunching and glass shattering filled the air as her Honda hit the front end of the minivan, bounced off the curb, flipped over, and landed on its roof.

“Come here, you.” He pulled Sam from her chair and held her at arm’s length, taking her in from the top of her cropped blonde head to her dark-washed jeans and the pointy toes of her cowboy boots, relieved to see she hadn’t changed since breakfast. Sensing the worry behind her deep blue eyes, he wrapped his arms around her slight frame and buried his face in the soft spot at the crook of her neck. “You never know when you wake up in the morning what the day will bring.”

"Tangle of Strings is another fine episode in Ms. Farley’s engaging series but I do suggest the series be read in order because each book builds on the one before and it’s the best way to fully understand the Sweeneys and other people in their lives. I’m sorry to say this appears to be the end of the Sweeney family saga but Ms. Farley has at least left us with the possibility of future installments and I’ll be very happy if that happens."

And don't forget to enter the giveaway below... 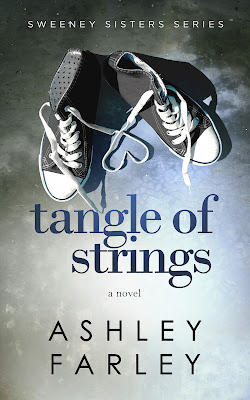 Some families never resolve conflicts. Not so with the Sweeneys. Their sense of family, their love for one another, and their willingness to forgive have always triumphed and brought them back together. Until now. The latest crisis threatens to tear the family apart and crumble the foundation that has always proved itself rock solid.

At the heart of the matter are sixteen-year-old Annie Bethune and her boyfriend, Cooper. At stake are their dreams for the future. As to these dreams, no one in the family holds back when asserting an opinion.

Annie soon begins to feel like a puppet on strings with all those she loves telling her what to do. When those strings become tangled and a family feud develops, Annie, unable to bear the pressure, runs away. Straight into the arms of danger.

Other Books in the Series 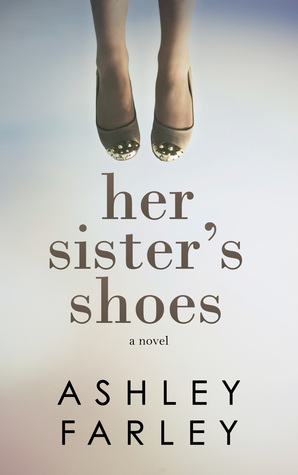 Set in the South Carolina Lowcountry and packed with Southern charm and memorable characters, HER SISTER'S SHOES portrays three sisters—Samantha, Jackie, and Faith—who struggle to balance the demands of career and family while remaining true to themselves.

Samantha Sweeney has always been the glue that holds her family together, their go-to girl for love and support. When an ATV accident leaves her teenage son in a wheelchair, she loses her carefully constructed self-control.

In the after-gloom of her dreaded fiftieth birthday and the discovery of her husband’s infidelity, Jackie realizes she must reconnect with her former self to find the happiness she needs to move forward.

Faith lacks the courage to stand up to her abusive husband. She turns to her sisters for help, placing all their lives at risk.

In the midst of their individual challenges, the Sweeney sisters must cope with their mother’s mental decline. Is Lovie in the early stages of Alzheimer’s, or is her odd behavior normal for a woman her age? No one, including Lovie, understands her obsession with a rusty key she wears around her neck.

For fans of Elin Hildebrand, HER SISTER'S SHOES is a contemporary women’s novel that explores and proves the healing power of family. 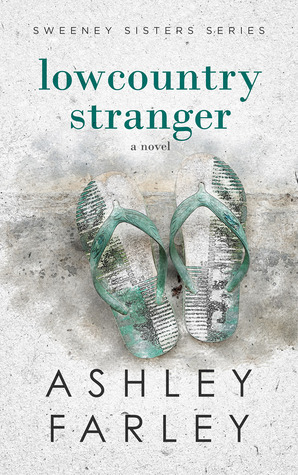 Family Drama, Southern Style.
There's a stranger in town. And it’s no coincidence when she shows up uninvited at a Sweeney family wedding. All eyes are drawn to this urchin who seems to have washed in with the tide. Before the night is over, the doe-eyed waif charms young and old with her street smarts and spunky personality. For better or worse, Annie Dawn is here to stay.

The memorable Sweeney sisters from Her Sister’s Shoes have returned with more suspense and family drama to hold you spellbound until the dramatic conclusion. As she approaches the next stage of her life as an empty nester, Jackie is torn between expanding her fledgling design business and spending these last precious months with her boys before they fly the coop. Her own worst enemy, Sam is terrified of making a commitment to Eli Marshall, handsome police officer, true love of her life. Her resolve is tested when a ghost from her past shows up after nearly two decades. Faith nurtures her seven-year-old daughter who is recovering from the trauma of her abusive father. Is the threat in the past, or is there more danger on the horizon? The sisters seek guidance from their mother, Lovie, a true Southern matriarch who shows them how to respond to adversity with grace and dignity.

Things are heating up in the Lowcountry. The Sweeney sisters remind us, once again, that being a part of a family is about more than sharing the same DNA. 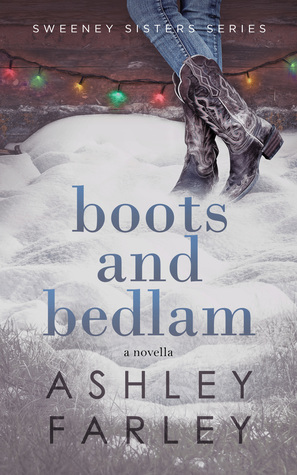 ‘Tis the season for chaos.

Wedding bells will soon be ringing in the Lowcountry. All Sam Sweeney wants is to marry her man on Christmas Eve surrounded by family and friends. But emerging complications, some humorous and some not so humorous, threaten to converge and derail the best-laid plans during the busy stretch between Thanksgiving and Christmas. Amidst the chaos—dealing with real estate, planning a wedding, running a seafood market, honoring traditions, and contending with teenagers—even the weather rears its head when the weatherman forecasts a white Christmas. Never has family support been more needed, but will it be enough to restore order and save the day?

Escape to the Lowcountry this Christmas where romance, intrigue, and holiday merrymaking await you.

Ashley Farley is the author of the bestselling series, the Sweeney Sisters Series. Ashley writes books about women for women. Her characters are mothers, daughters, sisters, and wives facing real-life issues. Her goal is to keep you turning the pages until the wee hours of the morning. If her story stays with you long after you've read the last word, then she's done her job.

After her brother died in 1999 of an accidental overdose, she turned to writing as a way of releasing her pent-up emotions. She wrote SAVING BEN in honor of Neal, the boy she worshiped, the man she could not save.

Ashley is a wife and mother of two college-aged children. She grew up in the salty marshes of South Carolina, but now lives in Richmond, Virginia, a city she loves for its history and traditions.